We are proud to present the twelve grantees selected for the 2022 Critical Issues Fund. The Critical Issues Fund supports filmmakers, with more than $250,000 in funding, whose work is focused on important and topical issues that are currently having a decided and material impact on communities domestically and internationally. The 2022 grant awardees have projects exploring some of the most pressing issues of the moment: the war in Ukraine, gun violence, reproductive justice, and climate emergencies.

“Through the Critical Issues Fund, we have identified films that have the potential to drive social change by sharing these stories with the world now—not years down the line. Chicken & Egg Pictures cares deeply about these issues and believes that a more equitable and just world can be shaped by the power of documentary films. Our hope is that through highlighting these stories told by talented women filmmakers, others will be motivated to action to support the films and the issues they highlight,” said CEO of Chicken & Egg Pictures, Jenni Wolfson. “We live in a world that’s not doing enough to prevent war, gun violence, climate change, or advance reproductive justice. We firmly believe these films can help in the fight for these issues.”

We are thrilled to give these filmmakers a warm welcome to the Nest. The 2022 Critical Issues Fund grantees are:

After Roe (Working title)
Directors: Amber Fares, Geeta Gandbhir (US/CANADA)
After Roe explores the ongoing nationwide battle playing out after the Supreme Court left the fate of tens of millions of women in the hands of politicians across the country.

Breaking the News
Directors: Heather Courtney, Chelsea Hernandez, Princess Hairston (US)
Producer: Diane Quon
Breaking the News follows a group of women and non-binary journalists, bucking the white male status quo, to launch The 19th*—a digital news startup that asks who has been omitted from mainstream coverage and how they can be included.

Displaced
Director: Olha Zhurba (UKRAINE)
Producer: Darya Bassel
Displaced captures a collective portrait of Ukrainians fleeing the grindstones of war, and those who stayed and are forced to adapt to life under constant shelling.

Frontline
Director: Alisa Kovalenko (UKRAINE)
Producer: Katarzyna Kuczyńska
Co-producers: Monica Hellström, Valeryi Kalmykov
Frontline is a diary from the frontline of the Russian invasion of Ukraine by a director and mother turned soldier.

Intercepted
Director: Oksana Karpovych (UKRAINE/CANADA)
Producer: Les Films Cosmos
Intercepted is a journey through Ukraine that reveals the banality of evil behind the Russian invasion.

Plan C
Director & Producer: Tracy Droz Tragos (US)
Plan C follows the journey of a grassroots network, with a controversial visionary at the helm, as they fight to expand access to abortion pills across the United States, and keep hope alive during a global pandemic and the fall of Roe v. Wade.

Razing Liberty Square
Director: Katja Esson (GERMANY/US)
Razing Liberty Square features Miami as ground zero for sea level rise. When residents of the Liberty Square public-housing community learn about a $300-million revitalization project in 2015, they soon discover that this sudden interest comes from the fact that their neighborhood is located on the highest and driest ground in the city. Now they must prepare to fight a new form of racial injustice: climate gentrification.

Red Zone
Director: Iryna Tsilyk (UKRAINE)
Producer: Darya Bassel
Red Zone shares Tsilyk’s very intimate and female perspective on the question—what does it mean to be a woman in the war times?

Sol in the Garden
Directors: Emily Cohen Ibañez, Débora Souza Silva (US/COLOMBIA/BRAZIL)
Sol in the Garden features Sol—who is released from prison after 16 years of incarceration—and follows her journey as she discovers that coming into her own freedom can be as challenging as living behind bars. Through a community gardening collective of formerly incarcerated horticulturalists in East Oakland, Sol strives to recover her humanity and sense of self.

We are egg-static that eight Nest-supported films will have their World premieres at the 2023 Sundance Film Festival.

The 2023 Sundance slate is made up of 28% first-time filmmakers. Chicken & Egg Pictures is committed to supporting filmmakers through the lifecycle of their films; we’re proud that five of the documentary films premiering at Sundance are grantees of our flagship program (Egg)celerator Lab, designed for first or second-time filmmakers.

See you in Utah!

2021 (Egg)celerator Lab grantee Against the Tide is having its world premiere in the World Cinema Documentary Competition.

Available in person and online
Premiering on Friday, January 20
Get your tickets

It’s Only Life After All

It’s Only Life After All was supported through Alexandria Bombach’s 2019 Chicken & Egg Award and is having its world premiere in the Premiere section.

Available in person
Premiering on Thursday, January 19
Get your tickets

2021 (Egg)celerator Lab grantee Is There Anybody Out There? is having its world premiere in the World Cinema Documentary Competition.

Available in person and online
Premiering on Sunday, January 22
Get your tickets

2022 (Egg)celerator Lab grantee Joonam is having its world premiere in the U.S. Documentary Competition.

Available in person and online
Premiering on Saturday, January 21
Get your tickets here

2019 (Egg)celerator Lab grantee Milisuthando is having its world premiere in the World Cinema Documentary Competition.

Available in person and online
Premiering on Saturday, January 21
Get your tickets

Plan C is supported through the Critical Issues Fund* and it is having its world premiere in the Premiere section.

Available in person
Premiering on Monday, January 23
Get your tickets

The Eternal Memory was supported through Maite Alberdi’s 2020 Chicken & Egg Award and is having its world premiere in the World Cinema Documentary Competition.

Available in person and online
Premiering on Saturday, January 21
Get your tickets

2021 (Egg)celerator Lab grantee The Tuba Thieves is having its world premiere in the Next section.

Available in person and online
Premiering on Sunday, January 22
Get your tickets 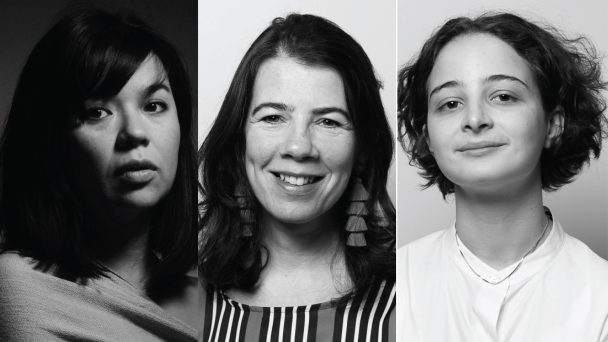 Our new Program Director Kiyoko McCrae will be in attendance along with Jenni Wolfson, CEO, and Rebecca Celli, Associate Director of Development.