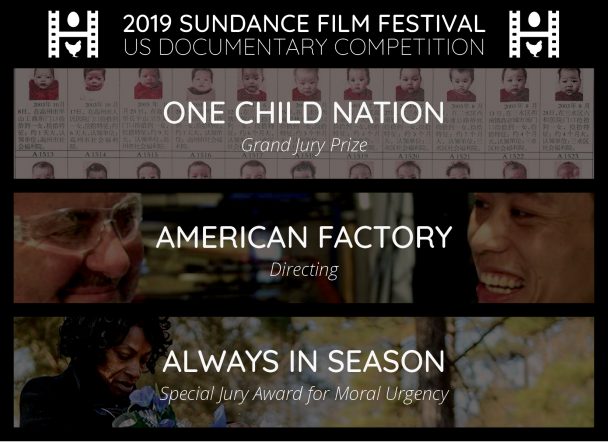 The Nest at the 2019 Sundance Film Festival

Chicken & Egg Pictures is coming to the 2019 Sundance Film Festival! In addition to seeing our filmmakers soar, we are delighted that they are contributing to a festival where 40% of selected films are directed by one or more women, and 53% percent of the directors eligible for the festival’s top prize are women.

The following Nest-supported projects and filmmakers from our Accelerator Lab and Breakthrough Filmmaker Award programs, along with several directors from our AlumNest, will be celebrating their world premieres.

As the trauma of a century of lynching African Americans bleeds into the present, Always in Season follows relatives of the perpetrators and victims in communities across the country who are seeking justice and reconciliation in the midst of racial profiling and police shootings. In Bladenboro, NC, the film connects historic racial terrorism to racial violence today with the story of Claudia Lacy who grieves as she fights to get an FBI investigation opened into the death of her seventeen-year-old son, Lennon Lacy, found hanging from a swing set on August 29, 2014. Claudia, like many others, believes Lennon was lynched.

Director Nanfu Wang is also a recipient of the 2018 Breakthrough Filmmaker Award.

In post-industrial Ohio, a Chinese billionaire opens a new factory in the husk of an abandoned General Motors plant, hiring two thousand blue-collar Americans. Early days of hope and optimism give way to setbacks as high-tech China clashes with working-class America.**

A look at the intersection of religion and activism, tracing the rise of The Satanic Temple: only six years old and already one of the most controversial religious movements in American history. The Temple is calling for a Satanic revolution to save the nation’s soul. But are they for real?**

In addition, the following films directed by Nest-supported filmmakers will be featured at the festival:

Knock Down the House, directed by Rachel Lears (director of Nest-supported film The Hand That Feeds with Robin Blotnick)

The Great Hack, directed by Karim Amer and Jehane Noujaim (Jehane is the director of the Nest-supported film The Square)

The Sundance Film Festival will run from January 24 to February 3, 2019. Congratulations to all, and we will see you in Park City!

Check out Chicken & Egg Pictures-supported films and filmmakers featured in the 2017 POV lineup:

Dalya’s Other Country
Directed by Julia Meltzer
Dalya’s Other Country tells the nuanced story of members of a family displaced by the Syrian conflict who are remaking themselves after the parents separate. Effervescent teen Dalya goes to Catholic high school and her mother, Rudayna, enrolls in college as they both walk the line between their Muslim values and the new world in which they find themselves. A co-presentation with the Center for Asian American Media (CAAM).

Motherland
Directed by Ramona Diaz
Motherland is an absorbingly intimate, vérité look at the busiest maternity hospital on the planet, in one of the world’s most populous countries: the Philippines. Women share their stories with other mothers, their families, doctors and social workers. In a hospital that is literally bursting with life, we witness the miracle and wonder of the human condition. Winner, 2017 Sundance World Cinema Documentary Special Jury Award for Commanding Vision.

Cameraperson
Directed by Kirsten Johnson (2017 Breakthrough Filmmaker Award recipient)
A boxing match in Brooklyn; life in postwar Bosnia; the daily routine of a Nigerian midwife; an intimate family moment at home: these scenes and others are woven into a tapestry of footage captured over the twenty-five-year career of cinematographer Kirsten Johnson. A work that combines documentary, autobiography, and ethical inquiry, Cameraperson is a thoughtful examination of what it means to train a camera on the world. Official Selection, 2016 Sundance Film Festival.

Check your local listings for the schedule in your time zone.

This weekend marked the beginning of the Year of the Fire Rooster  and things are definitely heating up here at the Nest.

At the 2017 Sundance Film Festival, four Chicken & Egg Pictures-supported documentary films and one VR project made their world premieres and walked away with three awards.

The message of these films couldn’t be more crucial in these times, whether they examine failings of the American justice system, the stigma associated with a misunderstood illness, document one of the most critical moments in modern US racial history, expose the dire implications of a lack of a reproductive healthcare policy, or promote environmentalism through an inventive mix of empathy and technology.

Check out these links to get to know a bit about our Sundance filmmakers and their projects:

READ: The Guardian‘s five-star review of Whose Streets?, directed by Sabaah Folayan and co-directed by Damon Davis

Here’s to amplifying fiery women’s voices in this Year of the Fire Rooster!! Congratulations to the five Chicken & Egg Pictures grantees whose projects will screen at the upcoming 2016 Sundance Film Festival.

6×9: An Immersive Experience of Solitary Confinement is the first virtual reality project supported by Chicken & Egg Pictures and will premiere as part of the New Frontiers program.

We look forward to seeing these films launch in Park City and begin their journey to reach audiences across the world.

The full program and schedule for this year’s Sundance Film Festival is available here.

6×9: An Immersive Experience of Solitary Confinement (The Guardian- Francesca Panetta & Lindsay Poulton)
Right now, more than 80,000 people are locked in a 6′ by 9′ concrete box where they have no human contact and every element of their environment is controlled. The sensory deprivation causes severe psychological damage. It changes them; they become invisible.

Cameraperson (Kirsten Johnson)
Drawing on footage she’s shot over the course of 25 years, cinematographer Kirsten Johnson searches to reconcile her part in the thorny questions of permission, power, creative ambition, and human obligation that come with filming the lives of others.

Sonita (Rokhsareh Ghaemmaghami)
18-year-old Sonita is an undocumented Afghan immigrant living in the suburbs of Tehran. In spite of all the obstacles she confronts in Iran and from her conservative family, she fights to live the way she wants: as a rapper. In harsh contrast to her goal is the plan of her family to make her a bride and sell her to a new family for the price of $9,000.

Trapped (Dawn Porter)
At least half of American women will experience an unintended pregnancy by the age of 45. Four in 10 unwanted pregnancies are terminated by abortion. What would happen if access to care for these cases completely disappeared? Following the progress of two southern reproductive health clinics, Trapped captures their struggle as they continue to provide care in the face of an increasingly hostile legal and political climate.

When Two Worlds Collide (Heidi Brandenburg & Mathew Orzel)
An indigenous leader is forced into exile and faces 20 years in prison for resisting the environmental ruin of Amazonian lands by big business. Refusing to surrender, he continues his quest, shedding light on conflicting visions shaping the fate of the Amazon and the climate future of our world.

Two Chicken & Egg Pictures grantees will head to the festival: (T)ERROR, directed by Lyric R. Cabral and David Felix Sutcliffe, and Something Better to Come, directed by Hanna Pollak.

(T)ERROR recently had its world premiere at the 2015 Sundance Film Festival where it won the US Documentary Special Jury Prize for Breakout First Feature. Something Better to Come made its debut at the International Documentary Film Festival Amsterdam (IDFA).

Netflix has acquired the rights Hot Girls Wanted on the heels of the film’s world premiere at the 2015 Sundance Film Festival.

When announcing the acquisition, Netflix VP of Global Independent Content Erik Barmack said, “Jill and Ronna have exposed a shocking world of hope and heartbreak. The filmmakers gained unprecedented access into a world never documented until now, and we are proud to bring their unflinching work to a global audience.”

Four Chicken & Egg Pictures grantees will be hitting the slopes in January at the 2015 Sundance Film Festival.

The Amina Profile (directed by Sophie Deraspe), Dreamcatcher (directed by Kim Longinotto), Hot Girls Wanted (directed by Jill Bauer and Ronna Gradus), and (T)ERROR (directed by Lyric Cabral and David Felix Sutcliffe) will be world premiering in competition at the festival, held every year in Park City, Utah.

For the full list of films that will be screening in the U.S. and World Cinema Dramatic and Documentary Competitions and the out-of-competition NEXT <=> section, click here.