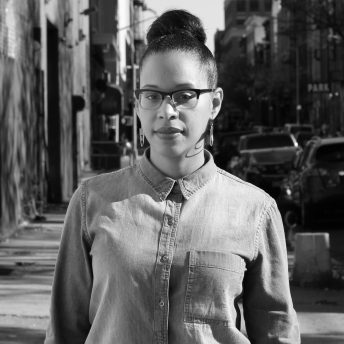 Loira Limbal is an Afro-Latina filmmaker, activist, and DJ interested in the creation of art that affirms women of color and builds solidarity across communities. Her first film, Estilo Hip Hop, aired on PBS in 2009.

Limbal is currently directing Through the Night, a verité documentary that explores the personal cost of our modern economy through the stories of two working mothers and a child care provider, whose lives intersect at a 24-hour daycare center in New Rochelle, NY.

For the past decade, Limbal has dedicated herself to fusing arts and activism. She has worked at various community-based organizations in New York City including The Point Community Development Corporation, The Dominican Women’s Development Center, and Sista II Sista. In 2006, she founded The Reel X Project, a social justice and creative filmmaking space for young women of color in the Southwest Bronx.

Limbal received a B.A. in History from Brown University and is a graduate of the Third World Newsreel’s Film and Video Production Training Program. She has received awards from the Bronx Council on the Arts, the Open Society Institute, the Ford Foundation, and the Lisa Sullivan Fund.

Limbal is the Vice President and Documentary Lab Director at Firelight Media. She lives in the Bronx with her two children.

Through the Night is a participant of the 2018 Accelerator Lab.