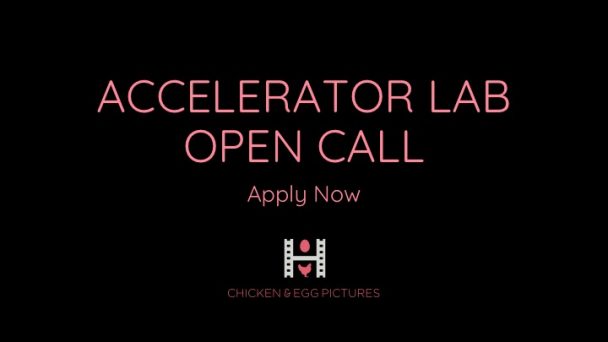 The Accelerator Lab is focused on identifying and supporting women nonfiction directors working on their first or second feature-length documentary. In this year-long program, ten projects will receive:

A glimpse at current and past projects that Chicken & Egg has supported through the Accelerator Lab program:

Through the Night, directed by Loira Limbal

Through the Night is a 2018 Accelerator Lab-supported film and is currently in production.

The Feeling of Being Watched, directed by Assia Boundaoui

The Feeling of Being Watched recently premiered at the 2018 TriBeca Film Festival and is also being featured at Hot Docs.

Muhi, a cherubic Palestinian toddler with a life-threatening immune disorder, was transported to an Israeli hospital as a baby for emergency treatment. He and his devoted grandfather have lived there ever since, stuck in a bizarre no man’s land, with their extended family living on the other side of a fiercely guarded checkpoint. Their unique and moving story takes place within the crucible of the current relentless Israeli-Palestinian conflict that impacts everyone in its orbit.

Muhi – Generally Temporary premiered at the 2017 San Francisco International Film Festival and was featured in the Human Rights Watch Film Festival of the same year.

And sign up for our newsletter to receive updates on the Accelerator Lab and other News from the Nest!