“I make films to give hope to the women of my country and to give guidance to those who want to know my country better. I make films to help build a safe society for the next generation and to record our journey to that point.” – Sahra Mani, Al Jazeera 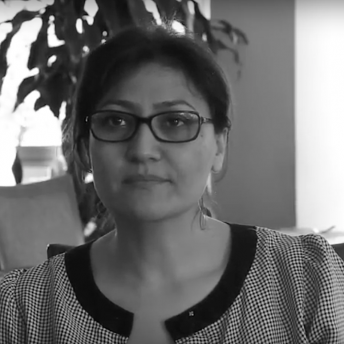 Sahra Mani is an award-winning Afghan filmmaker committed to using her skills as a filmmaker to amplify the voices of Afghan women to help bring about an understanding of their lives.

She received a BA in Digital Film Production from London Metropolitan University and an MA in Documentary Filmmaking from University of the Arts London.

Her latest feature documentary and 2016 Diversity Fellows Initiative grantee A Thousand Girls Like Me had its world premiere at Hot Docs this year, and went on to show at IDFA, Human Rights Watch Film Festival, and Sheffield Doc/Fest.

In Afghanistan where systematic abuses of girls rarely come to light, and seeking justice can be deadly, one young woman says “enough.” Khatera was brutally raped by her father since the age of nine and today she raises two precious and precocious children whom he sired. Against her family’s and many Afghanis’ wishes, Khatera forces her father to stand trial.

A shortened version of A Thousand Girls Like Me is available to stream on Al Jazeera.