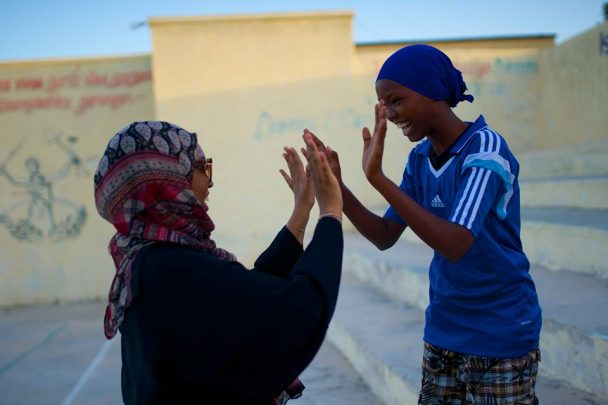 Tell us about your film. What stage is it currently in?

The film is about the Somalia women’s national basketball team. We’re following two young girls who were raised in Mogadishu and play for the team as, every day, they receive death threats from the terrorist organization, Al Shabaab, telling them to stop playing. At the same time, we’re following two older generation women who played basketball in Somalia before the civil war, twenty-seven years ago, who are training the girls for the Pan Arab Games.

We’re in production. The ending of the film will be the Pan Arab Games in February. Then we’ll move to the post-production.

How did you discover the female basketball players of Mogadishu and then decide they would be the subjects of your first feature film?

I used to work in a bank as a customer service agent. One day, one of my colleagues, who knew I was Somali, was reading an article. She came to me and said, Hana, you have to check out this story. And I read this story about these older generation players training these young girls in Somalia, and I was so inspired.

I did my research and reached out to the team in Somalia. I emailed them, explained who I was, and told them I was very interested in coming to Somalia to make a film. They were very supportive.

One month later, I came to Somalia with a skeleton-crew to see the girls, meet the coaches, and start the film.

Being a Somali woman who was born and raised in the U.A.E., what has been your experience being in Somalia to film Rajada Dalka?

I wanted to find Somalia through my eyes. I had never been because my parents left Somalia forty years ago and came to the United Arab Emirates.

The stories my mom told me were so different from what the media told me. Growing up in the U.A.E., every time I turned on the TV and people were talking about Somalia, they were showing the poverty and filming the war. I was never turning on the TV and seeing something positive about my country. I wanted to come closer to this culture.

When I went to Somalia to meet the team and film them, it was eye-opening for me. It was my first time in Somalia, and it was such an inspirational trip. Everything I was seeing, I was seeing for the first time. All the colors—all the beautiful colors that the women would wear! I was so in love with the people, the dances, the clothes, the poetry, the city, the story, and everything! And I felt so welcome. People really opened their doors to me. One day, I was waiting for my driver and people kept coming up to me saying, do you need anything? Do you need a ride? Are you lost?

I thought, this is something you don’t see. This is not something being shown to anyone. You see in the media that we are aggressive, that we are fighting, that we are dying. That’s all I had ever heard from people—Somali people are dying because they have no water, no access to food. But it’s not the whole country that’s in that position. I’m not denying that there is poverty. Everywhere, there’s poverty. But my film is going to show how these girls live. They’re struggling, how any other person is struggling. Like anyone living in New York City and working and living. Paying their rent, providing, and paying the bills. It’s the same life, I would say. These girls are happy in their home. That’s what I want to show. They don’t have to be in the US! They don’t have to be in Europe to be happy!

The only thing they need is to have security, to have a secure country that can support them. 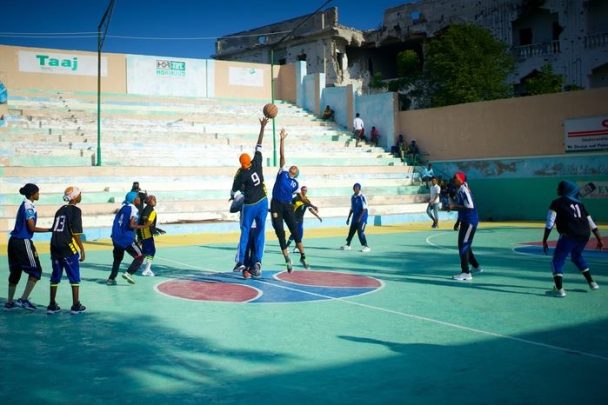 How can we, as an audience, relate to these women who risk everything to play the sport they love?

I think the film will inspire people who are going through similar conditions, or any conditions with an obstacle in front of them. You would not expect someone who receives death threats on a daily basis to continue playing basketball!

If someone told me, I’m going to kill you unless you stop making films, I would stop and think about me. We all get to live just one time in this world. We have to achieve what we really want and what we believe in.

And that’s why I relate to these girls. Initially, I had to hide the fact that I was studying filmmaking from my family. Like the girls in Mogadishu had to hide from their families that they were risking their lives playing basketball.

Are they supportive now?

They also got pretty encouraged when they found out I had been funded by organizations all the way in the US. They were like, okay, so she’s being supported internationally; this filmmaking thing is real, not just to her. So, they left me with that.

Glad we could help!

United Arab Emirates-based independent Somali filmmaker Hana Mire is the director and producer of the forthcoming documentary and her feature directorial debut, Rajada Dalka. She has taken film production courses at New York Film Academy in Abu Dhabi, has directed and produced short documentaries, and in 2013, she won an award at the Abu Dhabi Film Festival for her mini-doc, Silent Art. Last year, she was a Documentary Intensive Fellow at UnionDocs and a Diversity Fellows Initiative filmmaker.