An extraordinary, thirteen-year journey follows Yula, a young girl growing up in one of the world’s bleakest places — Moscow’s garbage dump “svalka” — and her dream of getting out one day. 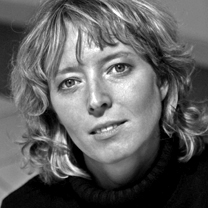 Oscar®-nominated director and producer, Hanna Polak, graduated from the Cinematography Institute of the Russian Federation, VGIK. Hanna has directed, produced, and shot several films that have won international awards including the Oscar®-nominated, IDA-winning, and twice Emmy® nominated The Children of Leningradsky. Railway Station Ballad won her the Best Producer Award in Poland, FIPA D’OR and Prix du Jury des Jeunes Europeens in Biarritz, France. For her cinematography work for Stone Silence, shot in Afghanistan, she was awarded with “Artistic Mastery of Photographing.” She recently produced Love and Rubbish for the Why Poverty? series.

Something Better to Come was selected to participate in 11 pitching sessions; at all three of the competitive sessions, the film won Best Pitch Awards, namely: The Best Pitch Award and Golden Funnel Award at East Documentary Forum, Prague; HotDocs Best Pitch Award and Cuban Hat Award in Toronto; and the Leipzig Best Pitch Award. The film had its world premiere at IDFA in November 2014, and was named an official selection of the 2015 True/False Film Fest.