Every day during exam season, as the sun sets over Conakry, Guinea, hundreds of school children begin a nightly pilgrimage to the airport, petrol stations and wealthy parts of the city, searching for light. A literal and metaphorical journey towards enlightenment, Black Out shows how children reconcile their daily lives in one of the world’s poorest countries with their desire to learn. 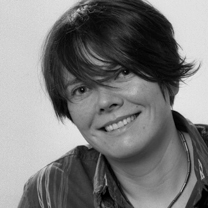 Originally from Germany, Eva Weber is a London-based filmmaker working in both documentary and fiction. Her award-winning short films have screened at numerous international film festivals including Sundance, Edinburgh, SXSW, BFI London and Telluride; and were broadcast on UK and international television. Her film The Solitary Life of Cranes was described as “one of the most absorbing documentaries of the year” by The Observer. Eva is currently in development with a number of feature projects. In 2013, she took part in the Sundance Institute’s Screenwriters and Directors Labs, and also received the Sundance Institute Mahindra Global Filmmaking Award.

Something Better to Come