Monica & David explores the marriage of two adults with Down syndrome and the family who strives to support their needs. Monica and David are blissfully in love and want what other adults have — an independent life. While Monica and David are capable beyond expectations, their parents have trouble letting go. Full of humor, romance and everyday family drama, the film uses intimate fly-on-the wall footage to reveal the complexity of their story. 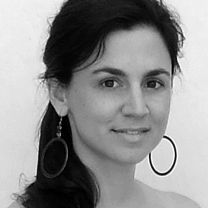 Alexandra Codina spent four years as Outreach Manager and Programmer for the Miami International Film Festival. Recipient of United Way’s Community Builder Award and Barry University’s Laudare Medal, she co-founded the Miami Filmmakers Collective to build community in her hometown.  She is currently editing a short documentary about the final season of a 96-year-old farmer, and developing her next feature documentary.

Monica & David had its broadcast debut on HBO & HBO Latino, with an audience of over 2 million viewers. The film has aired in 33 countries and been translated into 17 languages, and is the winner of Jury Award for Best Documentary at the Tribeca Film Festival; Emmy® Award nominee for Outstanding Informational Programming; and recipient of National Down Syndrome Congress’s National Media Award.  MONICA & DAVID had national media coverage in: Newsweek, NPR, ABC.com, Boston Globe, Univision, The Washington Post, Harper’s Bazaar, Latina Magazine, and more. DVDs of Monica & David (home video & educational versions) are completely accessible for audiences who are blind and hearing impaired, with audio description and subtitles in English and Spanish. To our knowledge, this is the most accessible DVD in North America, with full audio description to navigate the DVD menu and all bonus material.