Sunny Clifford, her twin sister Serena, and Brandon Ferguson are neighbors in Kyle, SD, a small town on the Pine Ridge Reservation. Their political awakening begins when Cecelia Fire Thunder, their tribe’s first female president, defies a South Dakota law criminalizing abortion by threatening to build a women’s clinic on the reservation’s sovereign territory. In the subsequent political firestorm, Sunny, Serena, and Brandon make choices that ultimately define who they are and what kind of adults they will become.

Young Lakota is co-directed by Marion Lipschutz and Rose Rosenblatt. 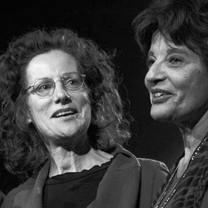 Marion Lipschutz and Rose Rosenblatt are partners in Incite Pictures and Cine Qua Non, a company dedicated to produces documentaries and media projects that explore critical contemporary issues. Young Lakota is the second film in a series that that uses the dramatic stories of individual women to explore the fraught terrain of reproductive rights and justice. The first, The Education of Shelby Knox, premiered at the Sundance Film Festival, and launched PBS’s POV series. Marion and Rose are currently producing Simple Justice: The Trial of Bei Bei Shuai, about a Chinese immigrant accused of murder and feticide for attempting to commit suicide while pregnant.

Young Lakota premiered on PBS’s Independent Lens during Native American History month as a part of the Women and Girls Lead Initiative. It is the centerpiece of an engagement campaign aimed at creating cross-cultural dialogue and coalition-building between Native American communities and the reproductive rights movement. Community screenings, discussions, and trainings dovetail with online activism and youth-led work, reaching a diverse and broad-based population. Press and festival presence boosts the film’s reach and Sovereign Bodies, a companion project, offers an online platform for showcasing the writings and work of Native women health leaders, as well as deeper content and context for the film. Young Lakota was also featured on Upworthy.com: “Are You Ready to To See A Bunch Of Bad-Ass Women Make History On A Native American Reservation?”