The promise of jobs from a proposed uranium mill has an economically devastated mining community in Colorado hopeful for the first time in decades. When environmentalists step in to stop the mill, pro-mill advocates are enraged. A debate ensues, pitting jobs against health and the environment. Without judgment, both sides of the issue are brought to life in heart-wrenching detail as the film follows conflicting opinions and visions for the future. 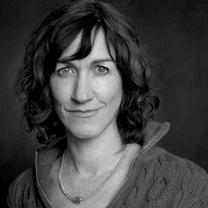 Suzan Beraza was born in Jamaica and raised in Puerto Rico. Social and environmental issues pervade her work. Her films have appeared on National Public Television, Pivot TV, at Lincoln Center, and at many festivals; her most recent, Bag It, was honored as a finalist at the Puma Creative Impact Awards in Berlin, and has been televised in over 30 countries.

Uranium Drive-In premiered at Telluride Mountainfilm in 2013 and went on to screen at festivals such DOC NYC, STARZ Denver, United Nations Film Festival, Heartland Film Festival, Big Sky Film Festival and many more. The film took home Jury Awards at Big Sky, St. Louis, Wild & Scenic, and Arica Nativa. The film was funded in part by Sundance Institute Documentary Fund and The Fledgling Fund. Uranium Drive-In is currently being broadcast on Pivot TV (Participant Media), and will be officially released on DVD and video-on-demand by First Run Features in the United States and internationally through JourneyMan Pictures; educational distribution is through New Day Films. The film’s website offers resources for viewers such as a university-level discussion guide, community screening tool kit, and resources for communities facing similar resource extraction issues.

The Babushkas of Chernobyl