Swamp Cabbage: A Wild & Sweaty Documentary is filmmaker Julie Kahn’s decade-long reckoning with Florida “Crackers,” a near-secret community intimately connected with the disappearing Florida wilderness. Filled with dark humor, tension, and unexpected truths from an under-explored and often-stereotyped region, what starts as a documentary about a quirky community event becomes a tragicomic quest not only to make sense of her home state of Florida, but also to reconnect with wildness, community and food chain. 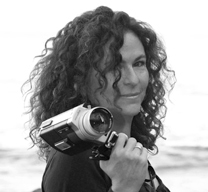 Julie Kahn is a filmmaker, producer and visual artist. She has also worked as an A&R executive at Columbia Records, content development director at Sony Pictures, producer for Annie Leibovitz, and investment banker at Morgan Stanley. Kahn has received numerous grants and awards for her projects that have exhibited internationally at festivals, museums and galleries including: Art Basel, Havana Biennal, Art in Embassies, and Rooftop Films. She graduated from Harvard with a BA and MBA. She recently completed residencies at SFFS FilmHouse and Headlands Center for the Arts. She lives on a houseboat in Sausalito with her two brown dogs.