Have you ever faked a restroom trip to check your email? Slept with your laptop? Or become so overwhelmed that you just unplugged from it all? This funny, eye-opening, and inspiring film takes audiences on an exhilarating roller coaster ride to discover what it means to be connected in the 21st century. A personal film with universal relevance, Connected explores how, after centuries of declaring our independence, perhaps it’s time to declare our interdependence instead. 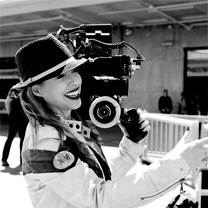 Honored by Newsweek as one of the “Women Shaping the 21st Century,” Tiffany Shlain is a filmmaker and founder of the Webby Awards. Her films and work have received over 65 awards, including a Disruptive Innovation Award from Tribeca Film Festival. Her new hit film series for AOL Originals, The Future Starts Here, explores humanity’s co-evolution with technology, and received over 20 million views. Tiffany’s newest collaborative “cloud” film, The Science of Character premiered globally on March 20th, 2014 #CharacterDay. More about Tiffany: @tiffanyshlain www.tiffanyshlain.com

Connected premiered at Sundance in 2011 and has won 16 awards since. The film had an 11-city US theatrical tour, has had thousands of screenings around the world, and is being used with its complete educational package at over 500 schools and universities. In May 2013, Connected was released on DVD and all VOD and digital platforms. It quickly became one of the top 10 documentaries on iTunes. The film had its television debut on KQED on Father’s Day 2013. It is currently being offered to all public television stations in the country as their fundraising film. The Connected script is included in the official Motion Picture Academy Library, and The U.S. State Department selected the film as part of the American Film Showcase where they send Director Tiffany Shlain and the film to embassies around the world to represent America.