A Palestinian community organizer, Ayed Morrar, unites local Fatah and Hamas members along with Israeli supporters in an unarmed movement to save his village of Budrus from destruction by Israel’s Separation Barrier. Success eludes them until Morrar’s 15-year-old daughter, Iltezam, launches a women’s contingent that quickly moves to the front lines. Struggling side by side, father and daughter unleash an inspiring yet little-known movement that is still gaining ground today. 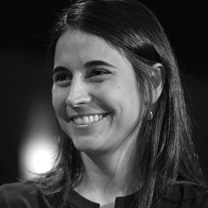 Julia Bacha is a Peabody Award-winning filmmaker and the Creative Director at Just Vision. Her credits include Control Room (Writer & Editor, 2004), Encounter Point (Writer & Co-director, 2006),  and My Neighbourhood (Director & Producer, 2012). Her work has played at Sundance, Berlinale, Tribeca, as well as the BBC, HBO, and Al Jazeera. In addition to 30 film festival awards, Julia received the King Hussein Prize, the Ridenhour Prize and the PUMA Impact Award. She’s a Term Member at the Council on Foreign Relations, a Young Global Leader at the World Economic Forum, and a TED speaker.

From Palestinian refugee camps and Israeli pre-military programs to Capitol Hill, TED, and the European Parliament, Budrus has reshaped the public debate on the role of nonviolence in securing a future of freedom, dignity, security, and peace for Palestinians and Israelis. The international public relations firm Edelman conducted an independent media audit of press coverage surrounding the film Budrus. The findings showed that the film not only put the village of Budrus on the map, but successfully shifted the media narrative around the protests from one of riots to one of a strategic nonviolent campaign. Anecdotal evidence also showed a profound impact on Palestinians, Israelis, and Americans who after watching the film reported greater interest in learning more about and joining the nonviolent movement to end the occupation and the conflict. Budrus won the 2012 PUMA Creative Impact Award.