State of Grace is a short (4-minute) film documenting an artistic rendition of a transformative dream. It is based on filmmaker Lourdes Portillo’s experience confronting illness. After being diagnosed with cancer, Portillo had a vivid dream in which her family members and ancestors who have died surround her in a circle. The film involves a moment when time stands still and one is filled with profound feelings that many think of as fleeting. Gratitude and hope, for example, are rarely discussed in relationship to illness. In the moment of sorrow, pain, and illumination, the film culminates in a state of grace. 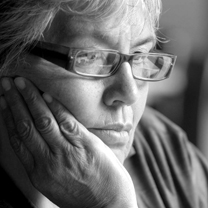 Born in Chihuahua, Mexico, and raised in Los Angeles, Lourdes Portillo is an award-winning filmmaker known for her signature hybrid style as a visual artist, investigative journalist and activist. Since her first film in 1979, After the Earthquake/ Despues del Terremoto, she has produced and directed over a dozen works, including the Academy Award and Emmy Award nominated Las Madres: The Mothers of the Plaza de Mayo; La Ofrenda: The Days of the Dead; Columbus on Trial; The Devil Never Sleeps; Corpus: A Home Movie for Selena; My McQueen; and Al Más Allá.  Lourdes’ work has screened at premiere cultural institutions and events around the world, including the Venice Biennale, Toronto International Film Festival, Metropolitan Museum of Art, and in the New Directors/New Films program presented by the Film Society at Lincoln Center and the New York Museum of Modern Art. She has been honored with eight mid-career retrospectives, including exhibitions at the Buenos Aires Museum of Modern Art, and in 2012 she was honored with a Retrospective of her films at NYMOMA.

In 2016, she received the Anonymous Was A Woman Award. She recently worked with the Academy of Motion Picture Arts & Sciences on the Pacific Standard Time LA/LA Exhibit, conducting oral histories from notable Chicano and Latin American filmmakers for the Academy’s ongoing oral histories project. The project was funded by the Getty Foundation, and various institutions throughout Los Angeles.