Regarding Susan Sontag is an intimate and nuanced investigation into the life of one of the 20th century’s most provocative thinkers. Passionate and gracefully outspoken, Sontag became one of the most important literary and political figures of her generation. The film explores Sontag’s life through evocative images, archival materials, and accounts from friends, family, and colleagues, as well as her own writings, read by actress Patricia Clarkson. Regarding Susan Sontag is a fascinating look at a towering cultural figure. 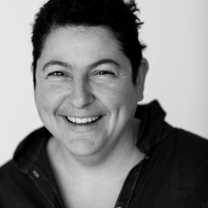 Nancy D. Kates produced and directed Brother Outsider: the Life of Bayard Rustin, with Bennett Singer, which premiered in competition at the 2003 Sundance Film Festival, and as a special of the PBS series POV. It received the 2004 GLAAD Media Award and many other honors, including significant press attention. Nancy received her MA from Stanford’s documentary film program in 1995; her thesis, Their Own Vietnam, received the Student Academy Award®. Nancy consults on other documentary projects as a writer and producer.

Regarding Susan Sontag received a Special Jury Mention at the Tribeca Film Festival (screened in the world documentary competition). The capsule reviews were extremely favorable; critics described it as “compelling, “perceptive” (The New York Times), “striking” (documentary.org), “enthralling” (Yahoo!), and a “must-see” (Shutterstock.com). Timeout.com raved that the “profile does well by the early years, critical texts and novels, but gets even further into the writer’s evolving private persona: unsatisfied, unbowed, unapologetic.” Vulture.com was equally enthusiastic: “That director Nancy Kates manages to hit so many important pivot points in Sontag’s life and career in a cinematically engaging way feels like a small miracle.”  Since Tribeca, the film has been well-received  at QDoc (Portland, OR) and the Seattle International Film Festival, with upcoming screenings at the Sheffield Doc Festival, Provincetown, Frameline, SFJewish Film Festival, the Jerusalem Film Festival,and many more.