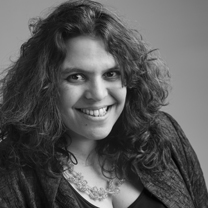 Peabody Award-winning filmmaker Judith Helfand is best known for her ability to take on the dark and cynical worlds of chemical exposure, heedless corporate behavior, and environmental injustice and make them personal, resonant, and even entertaining. Three of her award-winning films had world premieres at Sundance, and all have been nationally broadcast on PBS, HBO, and The Sundance Channel and linked to rigorous engagement. Her films include the The Uprising of ’34 (co-directed with esteemed veteran George Stoney), her groundbreaking personal film A Healthy Baby Girl, its Sundance award-winning sequel Blue Vinyl, followed by Everything’s Cool (both co-directed with Daniel B. Gold). She has taught the art of documentary film at New York University, New School, and was the Filmmaker-in-Residence at University of Wisconsin-Madison’s Nelson Institute for Environmental Studies in 2007 and 2009. As much an educator and field-builder as she is a filmmaker, Judith co-founded Working Films and sits on the boards of Great Small Works and The Lower East Side Girls Club. Her latest film in progress is Cooked, a feature documentary about the politics of disaster for which she was awarded a MacArthur grant.