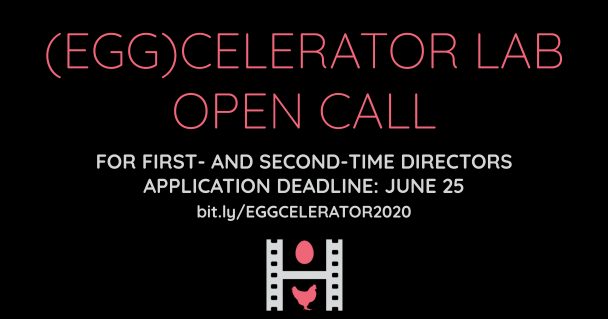 The (Egg)celerator Lab (formerly the Accelerator Lab) is focused on identifying and supporting nonfiction directors working on their first or second feature-length documentary. This program brings together ten projects, with a special focus on self-identifying women and gender nonconforming directors.

In this year-long intensive mentorship program, these ten projects receive:

Films from previous (Egg)celerator Labs have gone on to major international film festivals and TV broadcast debuts, where they have won numerous awards and critical praise; they have taken creative risks; helped foster important conversations about the issues they address; while the first- and second-time directors behind them have grown as leaders, enhanced their creative practices, and worked toward building a sustainable career in the film industry.

Read about select films from the last four (Egg)celerator Lab cohorts below:

From the 2016 (Egg)elerator Lab: Tre Maison Dasan, directed by Denali Tiller, is a story that explores parental incarceration through the eyes of three boys—Tre, Maison, and Dasan. Following their interweaving trajectories through boyhood marked by the criminal justice system, and told directly through the child’s perspective, the film unveils the challenges of growing up and what it means to become a man in America.

Tre Maison Dasan premiered at SFFILM in 2018; had its broadcast premiere on Independent Lens PBS last April, where it also was available for streaming; and the film’s impact campaign and engagement strategy #NationalVisitingDays worked to “strengthen bonds of family, and prompt a national reflection about the the rippling effects of mass incarceration in America.”

From the 2017 (Egg)celerator Lab: One Child Nation, co-directed by Nanfu Wang and Jialing Zhang, follows a filmmaker as she uncovers the untold history of China’s one-child policy and the generations of parents and children forever shaped by this social experiment.

One Child Nation premiered at the 2019 Sundance Film Festival, where it received the Grand Jury Prize for Documentary and was acquired by Amazon for global rights.

From the 2018 (Egg)celerator Lab: Always in Season, directed by Jacqueline Olive, follows the mother of Lennon Lacy, a 17-year-old who was found hanging from a swing set in rural North Carolina in 2014, as her search for justice and reconciliation begins and the trauma of more than a century of lynching African Americans bleeds into the present.

From the 2019 (Egg)celerator Lab: Silent Beauty, directed by Jasmin López, is a personal documentary that follows the director as she works to heal from child sexual abuse she endured at the hands of her grandfather, Gilberto, a Baptist minister, almost thirty years ago. In the process of sharing her own trauma with her large family, she learns that generations of children in her family were victims of the same abuse.

Silent Beauty is currently in production. During the 2019 (Egg)celerator Lab program year, Jasmin is also one of four recipients of the Jacqui Jones Memorial Scholarship by Black Public Media, and she recently participated in Tribeca Film Institute (TFI) Networks, where the project received a grant from TFI and DocsMX.

The deadline to apply to the 2020 (Egg)celerator Lab open call is Tuesday, June 25 at 3:00 pm EDT.  Apply now! And sign up for our newsletter to receive updates on the (Egg)celerator Lab Open Call timeline and other news from the Nest.